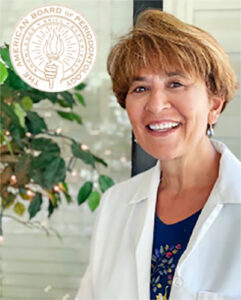 Dr. Hobbs is a Diplomate of the American Board of Periodontology and has over 25 years of dental and periodontal experience.

She is thrilled to be now practicing back in her hometown of 23 years , the great city of Hillsborough

She earned her undergraduate degree from the University of Maryland in College Park and went on to receive her DDS from the University of Maryland Dental School, graduating Magna Cum Laude. Dr. Hobbs completed her General Practice Residency at York Hospital in York, Pennsylvania and was the Chief Resident the following year at Carolina’s Medical Center in Charlotte, NC. Dr. Hobbs worked as general dentist in Charlotte for several years before deciding to specialize in Periodontics. She attended the University of California at San Francisco where she earned her certificate in Periodontology Specialty while simultaneously earning a Master’s Degree in Oral Biology. She received the “Most Innovative” Clinical Research Award in her Senior Year from the Western Society of Periodontology.

In 1997, Dr. Hobbs moved to Hillsborough NC where she began her private practice in Periodontology and Implantology. She operated a highly successful, private clinic in Durham and received her Diplomate of the American Board of Periodontology in 2000. She has been an Assistant Professor at UNC school of Dentistry Post- Graduate Periodontology Department since 1997 and she served as President of the North Carolina Society of Periodontology in 2014. In 2015, Dr. Hobbs started the Hobbs’ Spear Study Club. She enjoys the opportunity to interact with great restorative doctors and specialists and has been a member of numerous Study Clubs in the Triangle Area.

Dr. Hobbs was born in Egypt and raised in Germany. At the age of 9, she came to the U.S. with her mother. She did not know English at all and since the ESL classes in her school were at full capacity, she was instructed to learn English from watching Sesame Street. Dr. Hobbs excelled in her education and ended up doing an accelerated program for college and dental school – she graduated from dental school at the age of 21! Dr. Hobbs said, “I have truly lived the American dream and I owe it all to this country”.

Dr. Hobbs married her husband, Jim, a Greensboro native, and they are proud parents of their daughter, Madison. In her free time she enjoys spending quality time with her family, exercising and watching her daughter do gymnastics. Dr. Hobbs is a supporter of Hospice, The Food Bank of N.C., Durham Rescue Mission, Doctors without Borders and the Salvation Army. She also volunteers for the Baptist Mission Dental Bus and Miriam Dental Clinic.